Letter from Winston Churchill up for Auction

A handwritten letter by Winston Churchill is due to go under the hammer here at Dawson’s Auctioneers & Valuers on Saturday 22nd June.

The letter is dated 1906, within which Winston Churchill thanks the recipient, a Rev William Turner for his work in supporting the Liberal cause in Manchester. This letter which can be viewed from Friday 21st June and is expected to sell between £1,000 to £1,500.

Peter Mason, auctioneer and valuer here at Dawson’s analysed the historical relevance of the letter, which has been handed down by descent.

Mason said, “It was written at an interesting time in Churchill’s career, as two years earlier he had ‘crossed the floor’ in the House of Commons, moving from the Conservatives to the Liberal opposition.”

The change in opposition was an act in protest to the Government’s proposed Alien Bill – an act which was in pursuit to cease Jewish migration to Britain. Churchill stood as a Liberal candidate for Manchester North West in the 1906 General Elections and following election became Under-Secretary of State for the Colonies. 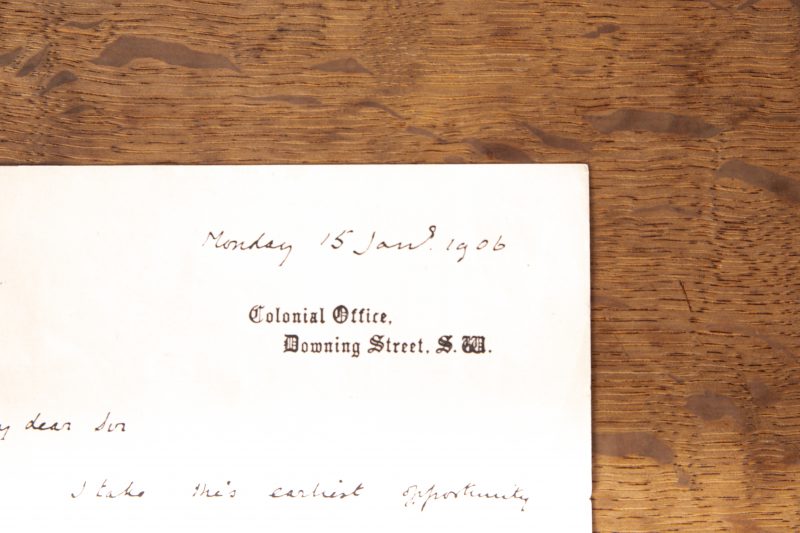 Mason continued, “He is better known as a conservative MP and Prime Minister of course, so it’s an unusual example of a letter written during his brief ‘defection’ to the Liberals.”

Winston Churchill’s letter addressed to Rev William Turner, thanking him for his support in the Liberal cause in Manchester.

Dawson’s has also sold other items of Winston Churchill’s memorabilia including, a signed book of his speeches, and a ‘half-smoked’ cigar. In addition to this, Dawson has also sold numerous other political items, such as governmental dispatch boxes, photographs, an letters. For more information or to get a free auction valuation on your item contact us today on 01628 944100.