A Touch of Glass

Rene Lalique Car Mascots - the works of a master. Extract from the Patek Philippe Magazine.

Fast cars, bright lights, and streamlined design gleamed in the 1920s, as did René Lalique's
radiator mascots. Made of shimmering mold-pressed glass, instead of the usual metal, the Art Deco designer's hood ornaments offered a finishing touch to any stylish luxury car.

In the new world that emerged from the upheavals of the Great War, the myth of speed and its accompanying machine aesthetic became the hallmark of the Roaring Twenties. Cultural life reflected the mania for constant movement, whether by automobile, train, or steamer – think of Pacific 231 (or Mouvement symphonique n° 1), Arthur Honegger's 1923 musical evocation of the locomotive; or Paul Morand's mainly autobiographical stories of a man in a hurry, L'Homme pressé (1941); or, then again, F. Scott Fitzgerald, and so many others.

After World War I the motorcar took over cities. In Berlin, continental Europe's first traffic lights were set up on Potsdamer Platz. In Paris, on the Champs-Élysées, the leading auto manufacturers opened lavish showrooms. Car races and rallies were popular entertainments and social events. In the microcosm of endless leisure immortalised by the photographer Jacques-Henri Lartigue, “automobile elegance” competitions showcased the combined talents of a couturier Jeanne Lanvin, Jean Patou, or Madeleine Vionnet – with that of a coach-builder such as Henri Binder, Jean-Henri Labourdette, or Henri Chapron. If the car was an essentially male passion, in 1925 it also inspired Sonia Delaunay to transform a Citroën B12 into an artistic manifesto on wheels, with colorful geometric motifs like her women's suits and accessories.

The jeweller and glassmaker René Lalique (1860–1945) made his first professional foray into the world of the motorcar in 1906, when he designed a gold plate for the winner of the Targa Vincenzo Florio, a perilous race around the roads of Sicily. But it was only in 1925 that he started producing radiator caps (or mascots) to adorn the grilles of luxury cars. Although the disappearance of visible cooling circuits meant that the radiator cap was no longer a necessity, it was felt that this decoration at the end of the hood made the car's look complete. In the 1920s and '30s thousands of mascots were made all around the world, so that each driver could stand out in keeping with his imagination (and wallet). Human or animal figures, these stylized mascots were nearly all molded in metal with a chrome, silver, or polished bronze finish.

René Lalique offered a range of 30 different models, inspired as ever by the female form and the animal kingdom (but not flowers, the great theme of his jewellery). Victory (or Spirit of the Wind), Five Horses, Speed, Epsom, Longchamp A, and B, Comet, Fox, Owls, and several other models, such as Chrysis, were conceived as radiator caps, with a chrome ring at the base for fitting them. Lalique's mascots were produced in white mold-pressed glass, which could be patinated, opalescent, or coloured. No mascot was made in crystal.

In 1925 Lalique brought out Five Horses, Comet, and Falcon, and in 1926, the Archer. The year 1928 was prolific, with the Dwarf Cockerel; various heads – Sparrowhawk, Ram, Eagle, Cockerel, and Peacock; a Greyhound; Saint Christopher, a Swallow, Dragonfly (small and large); a Frog; and Victory. In 1929 Longchamp A, and B, Epsom, Wild Boar, Perch, Speed, Houdan Cockerel, and Guinea Fowl appeared. This line of radiator caps came to an end with Fox in 1930 and Chrysis in 1931. The height of the mascots, without mount, ranged from 3.5 to 8 inches and the width from 4.7 to io inches.

The horse features prominently in the catalogue, as you would expect from man's noblest conquest. Five Horses, designed for Citröen in 1925, is the only mascot that was actually commissioned by a car manufacturer. Epsom (with a satin finish and polished mane) and Longchamp evoke the legendary racecourses in England and France, while the lines of the latter appear to have been inspired by the friezes of the Parthenon.

The theme of hunting is illustrated by the Falcon, Greyhound, Guinea Fowl, Fox, and Wild Boar, while Frog and Owl continue the countryside subject. The heads include a fine series of birds – Eagle, Sparrowhawk, Peacock, and Cockerel – and a Ram. All are creatures with connotations of triumph, even aggression. The Comet, whose movement echoes the jewel of the same name designed by Gabrielle “Coco” Chanel in 1932, dominates the earth, while the Perch has the waviness of the river just as the Dragonfly and Swallow suggest the movements of the air.

There are few representations of human forms. The Siren and Naiad belong to the genre of fantasy. Victory is more symbol than person, with its satin finish and polished hair blowing in the wind. Only Speed and Chrysis seem to be enjoying the sensation of the wind over their naked bodies, as suggested by their arched postures. With its intaglio motif and satin finish, Archer, by the simplicity of its lines held within a circle, evokes antique sculpture, while Saint Christopher recalls the traditional, reassuring figure of the patron saint of travelers. The legend goes that in the early twentieth century the first ever mascot was a statue of Saint Christopher, placed on an automobile owned by the second Baron Montagu of Beaulieu.

The transparency of the mascots' glass meant that they could be colored through internal lighting. A patent from January 22, 1929, describes the “luminous cap for motorcar radiators" that used a six volt dynamo-driven lighting system to light the mascots from inside. The brightness varied with the car's speed and the time of day. A little blade of dyed glass or a sheet of gelatin in the light was all that was needed to color the whole thing.

The British market had a passion for Lalique's designs, and he himself was an Anglophile, having studied in London at Crystal Palace School of Art, Science, and Literature from 1876 to 1878. To meet the high demand for mascots, Lalique's exclusive reseller in London - Breves Galleries, Knightsbridge – began to set his pieces on metal mounts signed in its own name. The firm sold Siren as a mascot, for example, which never happened in France. In 1929, Lalique designed a leaping Greyhound for the Prince of Wales (the future Edward VIII), which would be an extremely limited edition.

For safety reasons, car mascots began to disappear from the catalog in 1937, but their sale continued in England. Lalique marketed objects created from the same models and molds as decorative statues, paperweights, or bookends, mounted onto bases of black opaline glass.

In France, the Cité de l'Automobile exhibits the most luxurious cars from the interwar years, along with a collection of more than one hundred radiator caps. The Mullin Automotive Museum in California is another repository of art deco automobile art, where a number of the Bugattis, Delages, Delahayes, Hispano-Suizas, Avions Voisins, and Talbot-Lagos sport superb mascots.

And finally, since 2018 Britain's National Motor Museum, Beaulieu, Hampshire, has been the home of a private collection of 28 Lalique mascots. The ensemble, which was put together in only six years, is currently on loan and the museum is seeking funds to acquire the collection. Its owner, Ben Haynes, the chairman and founder of Dawsons Auctioneers in London and Maidenhead, started collecting when, as an expert angler, a Perch caught his eye at an auction. He researched the work of René Lalique and was hooked. Other acquisitions followed.

Today, all Haynes needs to complete his collection are the Comet, Owl, and Fox, which is not surprising as they are the most sought-after. The demand for rare pieces is international, and high prices reflect that, especially for those in good condition. Given their fragility, mascots without chips are hard to find. Victory is probably the most precious piece in Haynes's collection, with a value of about £30,000 (US$39,000).

The only collection of Lalique mascots that compares in completeness is to be found in Japan, at the Toyota Automobile Museum, Nagakute. The market itself abounds in fake pieces, while many of the originals are chipped or have abraded bases. (If you're interested, you can keep abreast of current values via online sales catalogs or the aggregator for international sales on rlalique.com.)

At the end of his life, René Lalique had become a veritable living treasure. In 1945, when he died, the catalog of Lalique products contained more than 1,500 models for glass objects. Today, Rolls-Royce, Bentley, Jaguar, and Mercedes keep the tradition of the car mascot alive, reminding us of a past, more decorative era. 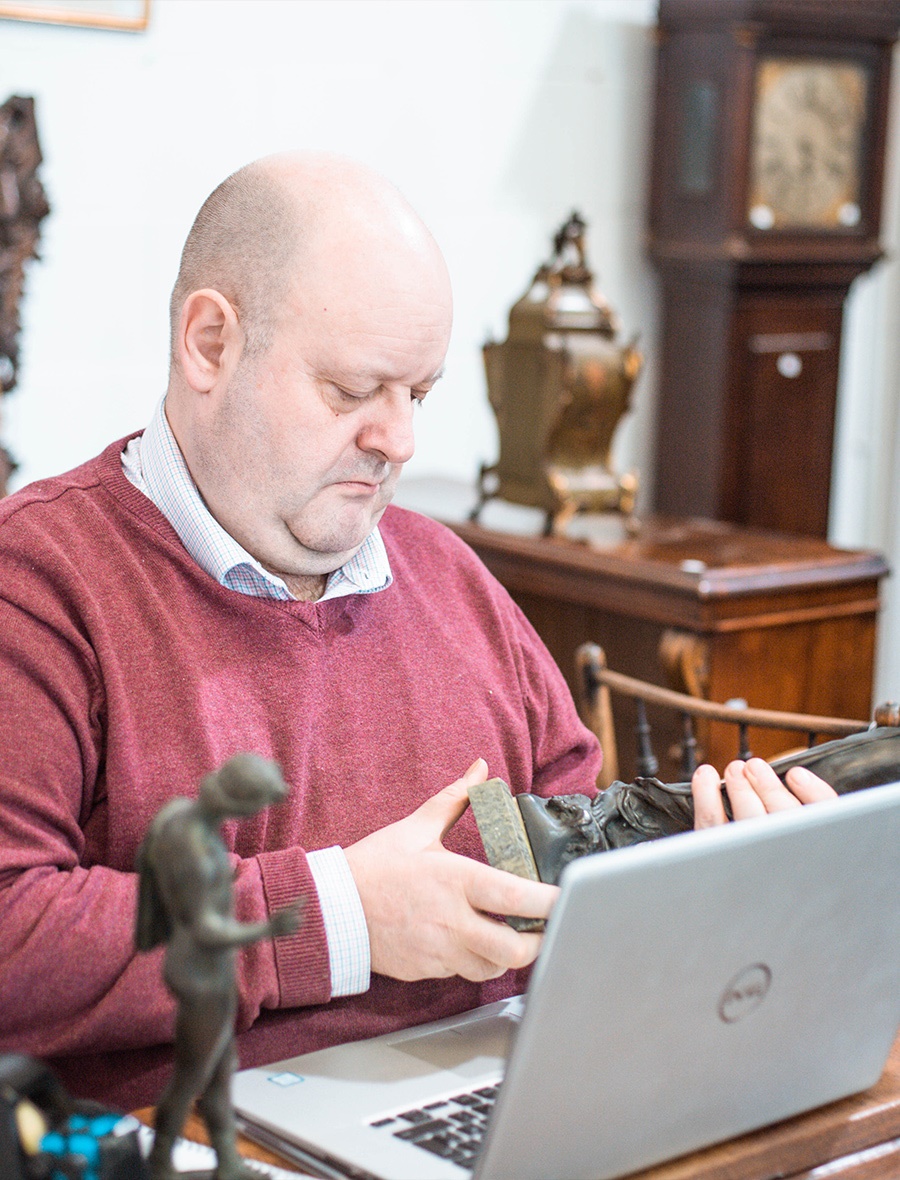