How do I know if my chess set is antique?

Learn how to determine if you have a valuable chess set in your home...

Somewhere between the global pandemic and the hugely popular Netflix series “The Queen’s Gambit”, the already admired game of chess has seen a resurgence.

The game of chess originated in India nearly 1500 years ago, and since then, it has evolved to ultimately resemble the English court and the game we know today. A game of strategy, the earliest known chess set is the Afrasiab Chessmen, made in ivory, which consists of seven pieces, a king, a chariot (rook), a vizier (queen), a horse (knight), an elephant (bishop), and 2 soldiers (pawns).

It wasn’t until the mid-1800s that Jaques of London produced the Staunton Pattern, named after self-proclaimed world champion Howard Staunton, which standardised the form of the pieces. The pattern quickly became the world standard for serious and casual play, and the International chess governing body (FIDE) recommends the Staunton set for tournaments. Consisting of two sets in contrasting colour, with sixteen pieces in each set, comprising of one king, one queen, two bishops, two knights, two rooks (castles) and eight pawns. The affordable production cost brought chess to the masses whilst popularising the game and ensured that today there are millions of players globally. 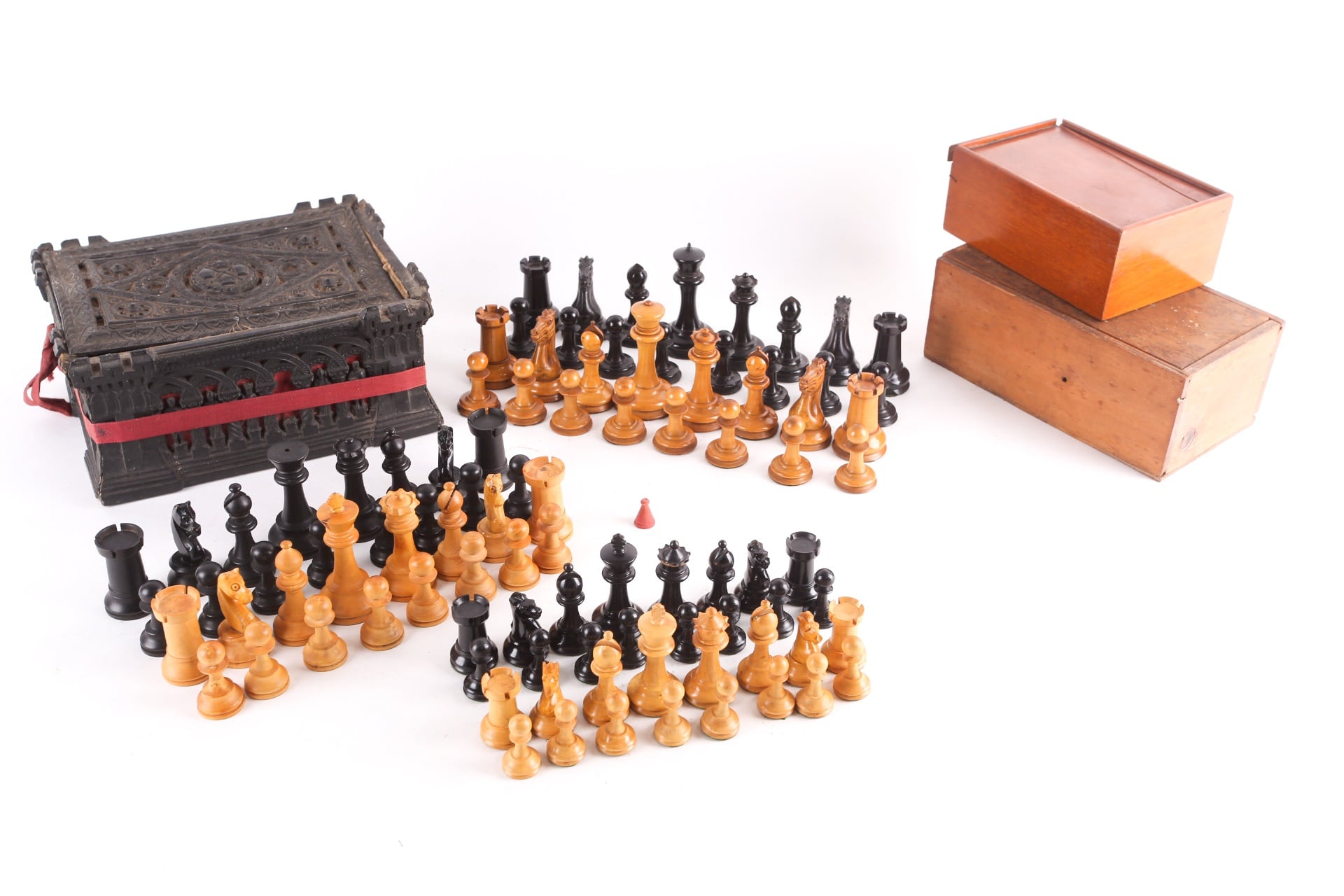 A Jaques Staunton boxwood and ebony chess set. Sold at Dawsons for £4,600

How can I tell if a set is antique?

There are many different genres and eras of antique chess sets that are prized by avid collectors across the world, and which invariably ensures a high value at auction. Pre-Staunton, Staunton, exotic and so forth. Let’s take a closer look at what features will help determine the age of a set.

By looking for any stamps or signatures, particularly under each piece and the actual chessboard, you may be able to determine this important key of information. Calvert, Lund, Fisher, Merrifield, BCC and of course, Jaques, are all examples of 19th century manufacturers.

An early Jaques set will usually be obvious from the look, but they will also be signed “Jaques London” across the bottom of one of the pieces, often the King. Green Victorian registration stickers were placed under each piece to show the design was protected.

The presence and type of sticker is an important clue for dating. The original Staunton chessmen were available in a Standard size (8.9 cm) and a Full Club size (11 cm king) only.

Jaques made many designs, but the most valuable of the Staunton chessmen were produced between 1849 and 1851, originally offered in boxwood and ebony, ivory and Wedgwood Carrara. The Carrara Staunton chessmen are, hands down, the rarest and most valuable. Only two Carton-Pierre caskets with the white Carrara Labels and four Wedgwood Carrara pieces (one Queen, Two Rooks and Two Knights) are known to exist. 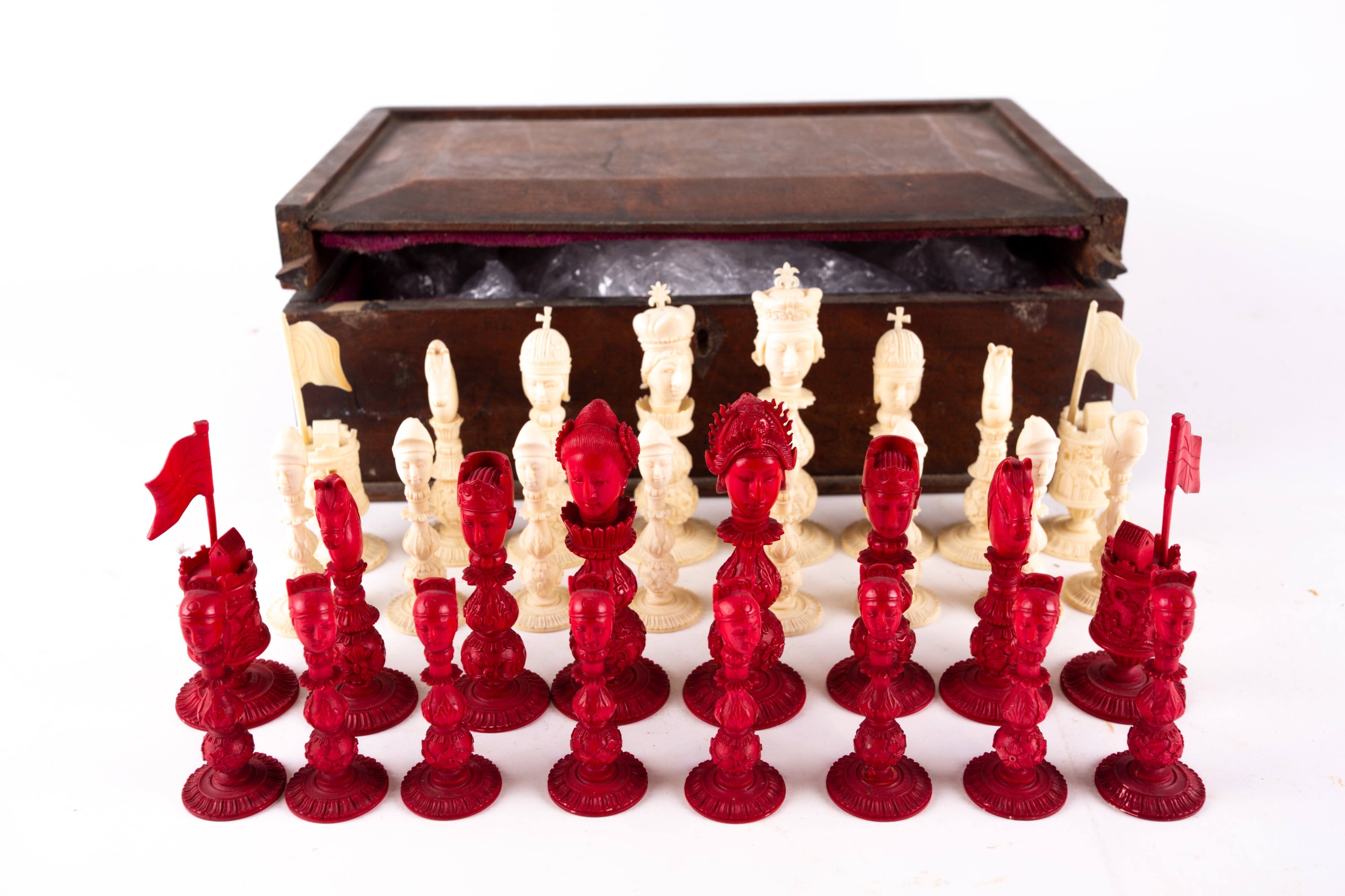 The pattern of the set can be very helpful when trying to ascertain age. Some features and patterns to look out for are; sloped-cut knights, Washington-style, St George, early and old English patterns, ornamental St. George pattern, Lund, central European (Selenus pattern), Barleycorn, Edinburgh/Northern Uprights, Dublin, as well as unique and intricate carved sets.

A wide range of materials have been used to create sets in a variety of styles. Exotic woods, precious metals, glass, clay, stone, ceramic, ivory, marble and more. Most modern sets currently produced are in plastic and resin. Quality sets created in the 18th and 19th century were predominantly made in ivory or fine wood, like ebony or rosewood. Cheaper versions were made in bone, although it is more difficult to carve and fashion.

The larger of these sets (4 inches plus) tend to be more desirable and more valuable than the smaller and regular 3.5 inch sets. An older, weighted set is worth more. Chessmen made from one piece of material rather than assembled from sections were more expensive to produce and therefore are often more valuable.

Natural and black stain sets were more common in the 18th century, whilst natural and red stained were popular in the 19th century.

Ivory tends to discolour over time towards a yellow tinge, it can also split in the direction of growth – very much like wood. The cracks often blacken with age. Ovalling and warping often are seen in old ivory and bone chess pieces as well as the wooden ones and are a reliable indication that the set is antique and not a modern copy.

A mid-19th century boxwood and ebony Staunton chess set. Sold at Dawsons for £3,500

Beware sets that are “made up”. The Staunton set by Jaques was produced in great numbers and pieces are relatively uniform, therefore it is easy to create a full set from several incomplete sets, which will affect the value. Look at any felt bases to determine if they are matching throughout, pay careful attention to the colour and material, they could indicate a matched set rather than original. It is common in a Jaques set for the boxwood side to be almost undamaged, but the ebony side doesn’t usually wear as well - often they split in their base because ebony is relatively inflexible and brittle.

Common types of damage include chipped collars to the pawns, part or whole loss of finials on the bishops, damaged crenellations on the rooks and queen, missing ears on knights, and damage or loss to the cross on the king. Restoration can repair this damage, but cost should be considered. Inspect each piece for chips and splits along the bodies.

Always line up a set and match the pieces to ensure it is complete, i.e.: two knights, eight pawns, etc. Missing knights in Jaques sets are the most difficult to replace since they were carved not turned.

If you are keen to expand your knowledge on antique chess sets, we suggest you view and handle as many chessmen as possible, inspect each piece carefully and make sure to note any differences such as engraving, monobloc vs assembled, colour and style. Should you decide to join other enthusiasts and start your own collection, remember to always buy the best you can afford. There is still a lot more information regarding antique chess sets that needs to be developed, established and documented – which makes it a relatively niche specialism.

Our team of experts at Dawsons are always happy to provide a free verbal appraisal and auction valuation; regularly consigning many wonderful items to our monthly Fine Art, Antiques & Asian Art sale.

We can also provide insurance valuations, where required.

Please do get in touch, should you any Fine Art, Antiques, or indeed a chess set that you are keen to have valued.