What Are Old Brilliant Cut Diamonds?

The splendour of diamonds has been appreciated for centuries, but prior to the 20th century we didn’t have much scientific knowledge of these precious gems. So, what makes the old cut diamond continuously desirable, and why are they different to the diamonds we see produced today?

If you have ever taken the time to get to know a bit more about diamonds, you will be familiar with the collective term the “4Cs”: diamond colour, clarity, cut and carat (weight). These are the measurable factors which define a diamond’s quality and determine its ultimate value in today’s market. It is an international term which means it is understood across the board, in any language.

Far more convenient than how things operated prior to 1940 – where a diamond would be described as “a bit included”, or “slightly tinted”, or “made well” – all very subjective terms when you consider what is being described.

A diamond cluster ring. Sold at Dawsons for £7,800

The first diamonds were discovered in India, and some historians theorise they were being used for trade as early as the fourth century BC! Yielding limited quantities, that started declining by the early 1700s, Brazil then emerged as a new source and dominated the market for more than 150 years.

By 1750, brilliant-cut diamonds had developed into a circular face-up style which progressed through many variations and resulted in certain periods having very distinctive appearances. Artisans spent hours measuring and hand-cutting/finishing diamonds, they would determine the positioning of facets and every aspect of the look and feel of the diamond. Diamonds cut between the 18th and 19th century were often termed Old Mine cut.

In 1866, diamond deposits were discovered in Kimberley, South Africa and it was this discovery that forced advances in many areas of the industry. More efficient techniques were developed in the mining (going further underground) and more refined techniques for the cutting, including using steam-driven and motorised tools for precision. During this period, changes to the number, placement and proportions of facets resulted in diamonds that were more brilliant than had ever been seen before. Some professionals refer to diamonds cut in this period as “transitional”, as that is exactly what was happening between the 1870s and 1940s, the transition from old to modern brilliant-cuts.

There are two main sections to a diamond, the crown (top side) and the pavilion (bottom). The crown disperses the light - fire, and the pavilion is responsible for the brilliance - reflections, together these two factors determine a well cut stone. Shallow pavilions tend to create windows (white areas) in the stone, where deep pavilions create dark areas. Older diamonds often show a pattern referred to as “checkerboard” (larger light and dark areas), whilst modern diamonds might be described as having “splintery” patterns (much tighter light and dark areas).

The character and personality of an old cut diamond can be mesmerising. The facets are all individual and shaped in their own unique way, resulting in a deep and warm lustre with a glowing hue that captivates. This glow is what makes old cut diamonds look their best under candlelight. The individual “scintillescence” often gives the appearance of soft glistening in the sunlight.

Each old cut diamond carries its own story, a true piece of history with a stunning aesthetic.

A diamond single-stone ring. Sold at Dawsons for £5,800

Modern technology is utilised extensively in the cutting of today’s diamonds. Diamond cutters and lapidarists use scans and lasers to obtain the best and most efficient polished diamond, showcasing optimal light, sparkle and brilliance.

Diamonds are prized for their colour and dispersion, which makes good proportions when cutting vital, there are even ideal proportions for a round brilliant-cut diamond nowadays. These tolerances ensure an ideal cut for the stone.

Table facets have become larger, culets smaller, and star and pavilion facets longer. Older diamonds present quite the quandary for diamond-grading laboratories as their proportions diverge from contemporary conventions and this makes them tricky to judge against today’s aesthetic.

Regardless of this, there is a huge demand for these stones because of their antique character and beauty. Their “play on light” (reflections and fire) can be quite charming in spite of their unconventional proportions.

Modern brilliant cuts are created so that light enters the stone and bounces right back out, producing the brilliant white sparkle effect that most people associate with diamonds. The facets positioning, smaller tables (top facet) and taller crown seen in the old cut diamonds creates an almost glowing sparkle which is deeper and warmer than the modern variation. 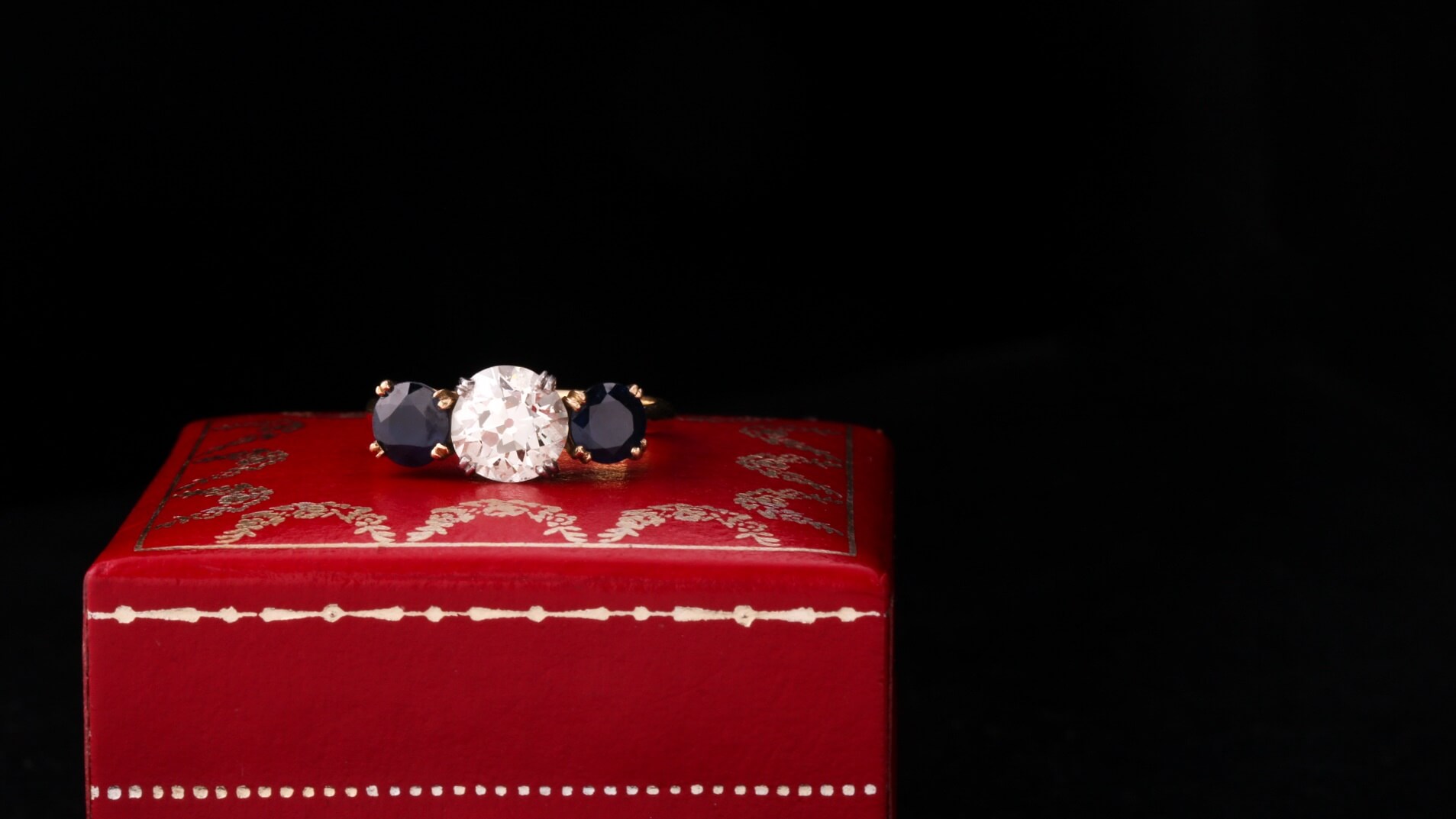 A sapphire and diamond three-stone ring. Sold at Dawsons for £3,000

Most modern diamonds have a pointed tip at the bottom, which reflects any light entering the stone. An old cut diamond is rarely fully symmetrical, measured by eye and cut by hand, the facets are never completely identical, and the pavilion facets would rarely be uniform. As such, cutters at the time would leave the culet open, rough or polished, as they believed it let more light into the stone and increased brilliance. This open culet can appear as a dark circle or be mistaken for a hole.

These imperfections are where the true beauty and appeal of an old cut diamond lies. Environmentally friendly, impressive old cut diamonds are becoming increasingly rare. Over the years, many have been recut limiting the ones left on the market.

When we look at the overall appearance of the two cuts, it’s easy to see why the undeniable charm and aesthetic of an old cut diamond make it a popular choice. Imagine the life story a diamond has had, who might have worn it previously and the captivating adventure the ring has been on.

Please do get in touch should you have any queries or maybe you have a piece of jewellery you would like to have valued.