Large Collection of Martin Ware for sale in September

The collection was gathered by Samuel L. M. Avery, a master builder and acquaintance of the Martins, who lived near to their Southall Pottery, and it has remained in his family ever since.

A rare collection of 40 pieces of Martin Ware

Dawson’s Auctioneers are delighted to be selling a large and rare collection of Martin Brothers ceramics on September 21st 2019. The collection was gathered by Samuel L. M. Avery, a master builder and acquaintance of the Martins, who lived near to their Southall Pottery, and it has remained in his family ever since. It was only following the recent passing of his daughter that her children discovered the items hidden away in her home. Whilst they knew that there were examples ‘somewhere’, (having grown up with them around the house as children), they were in the dark as to the extent of the collection and exactly where it had been left. It was found wrapped up in newspaper dated 1971.

Samuel Avery visited the Martin brothers regularly at their place of work and knew them on a social level as well, with a printed record mentioning him ‘going mushroom picking’ with them in the fields near Southall. The family legend has it that he felt a little bit sorry for them given the apparent chaotic nature of their business, and would often buy items directly from them, before they left for the Martin Brothers’ shop in Holborn. They are certainly known for their unconventional business model, with perfectly good pieces often being destroyed immediately after production, due to slight perceived imperfections. In addition, Charles Martin, who ran the Holborn shop, is reputed to have hidden the more expensive pieces from customers on occasion, especially those who he thought were not the right clientele for the ware. Although he wouldn’t have known it at the time, Avery was amassing a particularly impressive collection, with examples ranging across several years and includes many of the familiar Martinware items, such as the grotesque ‘face mugs’ and aquatic vases, but also some architectural elements and terracotta plaques produced by Robert Wallace Martin prior to him setting up the family business. In all, the collection provides a tangible, almost direct link, right back to the famous pottery works of over a century ago, and is therefore sure to be of interest to collectors around the world. 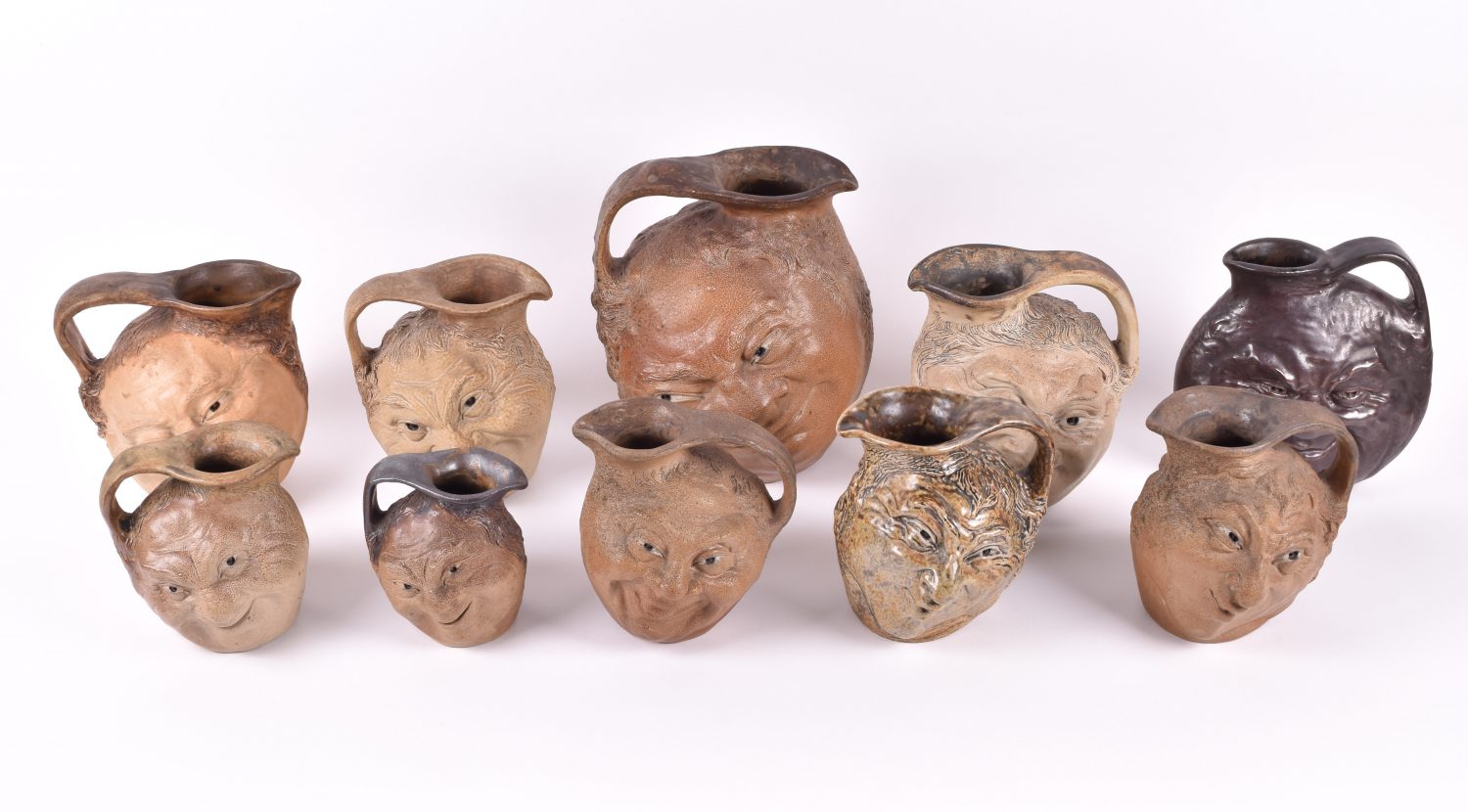 Part of Samuel Avery’s original collection included an elaborate architectural fountain, which he donated to the borough of Southall following Robert Wallace Martin’s death, (in memory of its creator), and this was erected in the Manor House Grounds in Southall – a picture of it is included in Malcolm Haslam’s ‘The Martin Brothers Potters’ (published 1978 by Richard Dennis, page 137 [Fig. 215]). He is also on record as having lent examples of Martin Ware to various exhibitions in the first of the 20th century, as well as supporting Clement Martin (son of Wallace), in the late 1920s, who oversaw a brief (but unsuccessful) revival of the works. 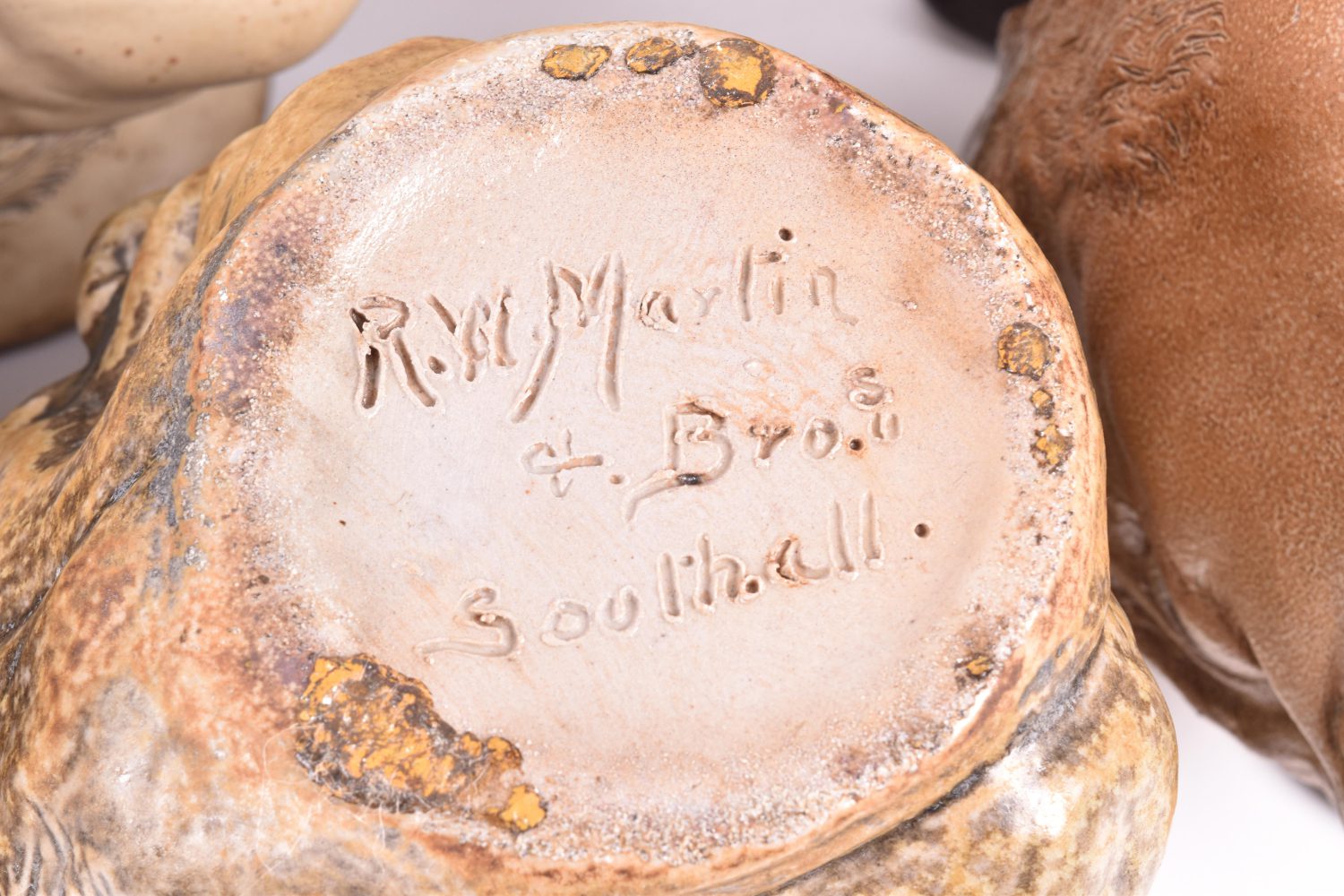 Signature to the base of the one of the face jugs

With there being approximately forty lots in the upcoming sale, it will be one of the largest single owner collections to have been sold at auction. Perhaps the most recognisable item is a triple bird group, produced by Robert Wallace in 1904. It features three anthropomorphic birds decorated in variously coloured glazes, entwined and standing on a rectangular base. Each has a ‘movable’ head, allowing for their distinctive and somewhat sinister faces to be viewed from all angles. Standing 20.5 cm tall and carrying a pre-sale estimate of £25,000 – £35,000, it is a remarkable piece of work and a testament to the unique nature of Martin Ware. Other sale highlights include several examples of the face mugs (in different sizes), each variously estimated from £800 – £1,200 up to £4,000 – £6,000, as well as pairs of vases, egg cups, three rare oil lamp reservoirs and even two ‘heads’ from the large bird jars.

With the sale taking place from midday on Saturday 21st September, viewing is available by appointment from Monday 16th September at Dawson’s Maidenhead saleroom. We are currently inviting further entries for the sale – please contact auctioneer and valuer Peter Mason at Dawson’s with any enquiries: 01628 944100 or peter@dawsonsauctions.co.uk