Are Omega watches a good investment?

As one of the oldest Swiss watch brands, Omega has transformed horology throughout the years. Both new and used, Omega watches are incredibly popular among collectors and enthusiasts. Prestigious and well respected, they provide technically advanced, quality timepieces to last through the generations.

When investing in an Omega wristwatch, achieving an increase in value over time is the main goal, but also importantly, so is enjoyment for the wearer. Two of Omega’s most sought after models are the Seamaster and the Speedmaster, which historically prove to be the safest investments.

Launched in 1948 in celebration of Omega’s 100th anniversary, the Seamaster is a cornerstone of the Omega brand. Originally a humble gentleman’s dress watch of slim profile with Dauphine hands and a leather strap, which happened to be dust and moisture-proof, it now boasts one of the most varied and longest-running lines within the company. Based on designs made for WWII airmen, the Seamaster was modelled after the Omega Marine, ref 679 from 1932 – which was the first tested and approved waterproof diving wristwatch. During the initial debut, there were two variations on the stainless steel Seamaster, one had centred seconds and the other had small seconds at bottom of dial.

What distinguished the Seamaster from its predecessors was its O-ring gasket which improved its water-resistance. Previous examples relied on temperature sensitive lead or shellac gaskets. Inspired by the submarines of WWII, Omega included a resilient rubber gasket in the final design, these cases remained intact at depths up to 60 meters and temperatures of 50 degrees Celsius. The engineers were so confident of the Seamaster’s durability that in 1956 they attached one to the outside of a Douglas DC6 aircraft for the duration of its Polar Route over the North Atlantic. After nearly nine hours of continuous exposure, the watch was found to be in “perfect working order and keeping good time”.

The age of discovery gave birth to watches built for specific purposes and professions, and in 1957 Omega exploited this opportunity with the release of their trio of Master watches: the Speedmaster, the Railmaster and the Seamaster 300 (start of the Seamaster we know today).

The Seamaster 300 featured a unidirectional rotating bezel, black dial with luminous markers, as well as a record of rigorous water testing. In 1964, the Seamaster casing expanded to 42mm and was fitted with the speedy/bombé lugs that are now universal on most current models. Over the years, apt tweaks and extensions have ensured the continuity of the impressive Seamaster product range.

Since 1995 when the Omega Seamaster became the official watch of James Bond, there has been a surge in popularity for these models. A favourite of Prince William, he almost always wears his Omega Seamaster Professional, which was gifted to him by his late mother Diana. If it’s fit for a Prince and good enough for 007, who are we to disagree. 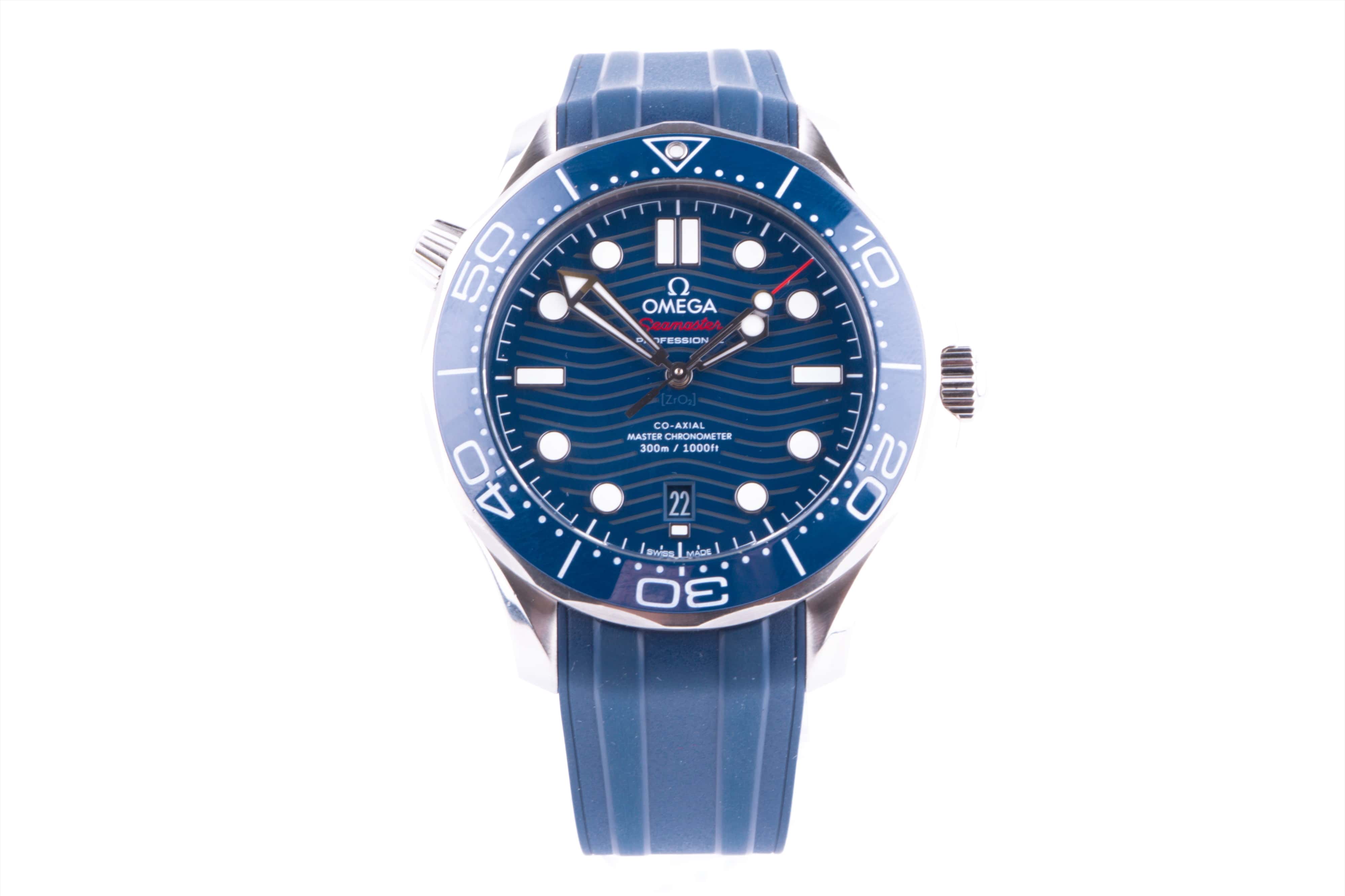 The Speedmaster was introduced in 1957 as one of the trio of Master watches. A sports and racing chronograph, it complemented Omega's position as the official timekeeper for the Olympic Games, and it became a favourite with pilots to track flying essentials such as fuel consumption and trajectory.

Also known as the "Broad Arrow", this first Speedmaster laid the groundwork for some of the signature hallmarks of the model that we know today. A triple-register chronograph with high-contrast index markers and domed Plexiglas crystal, straight lugs, broad arrow hands and an engraved steel tachymeter bezel, in a 39mm diameter case.

In 1962, NASA secretly purchased a selection of chronographs with the aim of finding a watch suitable for their astronauts to wear in space. Only three watches satisfied all pre-requirements and the initial testing phase. In 1964 these finalists were subjected to eleven rigorous tests, including high and low temperatures; temperature-pressure; relative humidity; oxygen atmosphere; shock; acceleration; decompression; high pressure; vibration; and acoustic noise. On March 1st 1965, the test results were completed and only the Omega Speedmaster passed, defeating amongst others the Rolex Daytona, and cementing its’ place in history as the first ‘Moon Watch’.

On the 20th of July 1969, Buzz Aldrin stepped onto the moon surface wearing his Omega Speedmaster Professional with a Calibre 321 movement. In tribute to this historic event, Omega created their very first commemorative numbered edition, the Speedmaster BA145.022. Made in 18ct yellow gold with a burgundy bezel, and an inscription on the caseback “to mark man’s conquest of space with time, through time, on time.” Only 1,014 models were produced until 1973. The very first of these was created for US President, Richard Nixon, with number two allocated to the US Vice President Spiro Agnew. However, these two watches were subsequently returned to Omega due to the US government’s strict gifting protocol. Model numbers 3 - 28 were given to the NASA astronauts,including the 3 models that were assigned posthumously to the three members who died in the Apollo 1 mission: Virgil Grissom, Ed White and Roger Chaffee. Watches 29 to 32 were offered to Swiss watch industry leaders and politicians, without any engraved number. The public were given the opportunity to purchase model numbers 33 – 1000, these models had a different caseback inscription, reading “OMEGA SPEEDMASTER”, “APOLLO XI 1969” and “Ω THE FIRST WATCH WORN ON THE MOON”. They also came in an exclusive moon crater presentation box. Model numbers 1001 – 1008 were later presented to astronauts of Apollo 14 and 17. The remaining models 1009 – 1014 were reserved for other personalities of importance.

In 1970, an explosion in the Apollo 13 forced the crew had to evacuate. The pilot, Jack Swigert, used his Speedmaster to precisely calculate the critical 14 seconds of engine boost to angle the shuttle for re-entry into the earth's atmosphere. Omega was awarded the Snoopy Award by the Apollo 13 astronauts in recognition of this.

The Speedmaster Professional remains the most tested watch in the world. Omega is currently designing a Speedmaster model capable of a mission to Mars, planned for 2030.

Over the years, variations including automatic models, reduced sizes, sapphire crystal versions and different dial colours and case metals ensure the model is still going strong. The Omega Speedmaster Moonwatch remains one of the most iconic chronographs ever designed. 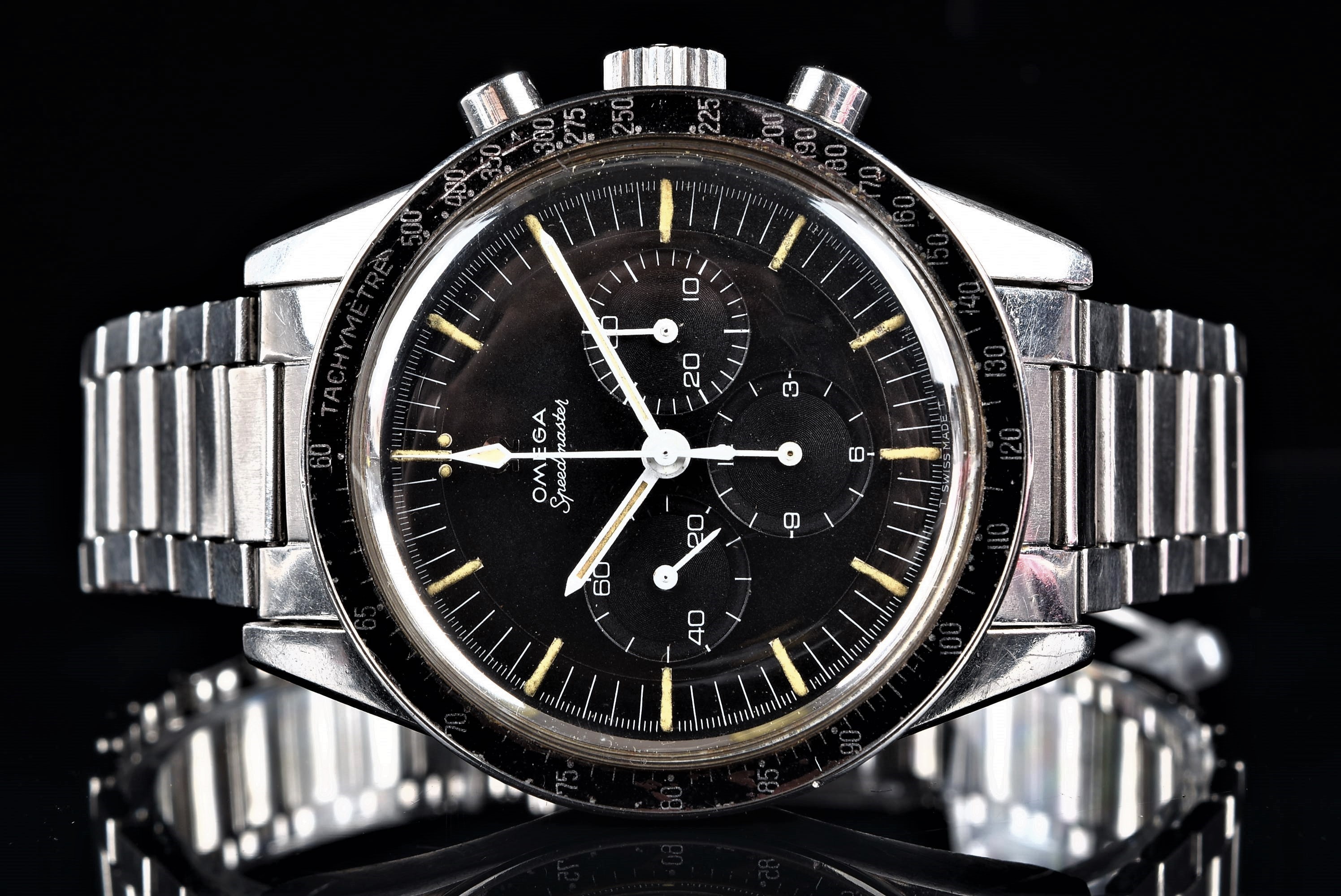 You simply can’t go wrong with an Omega. Innovative and sophisticated – a watch of true horological craftsmanship. There is such a wide range of utility and aesthetics to choose from, we are certain that their legacy is one that will last.

Please do get in touch should you have any queries or maybe you have a timepiece you would like to have valued.